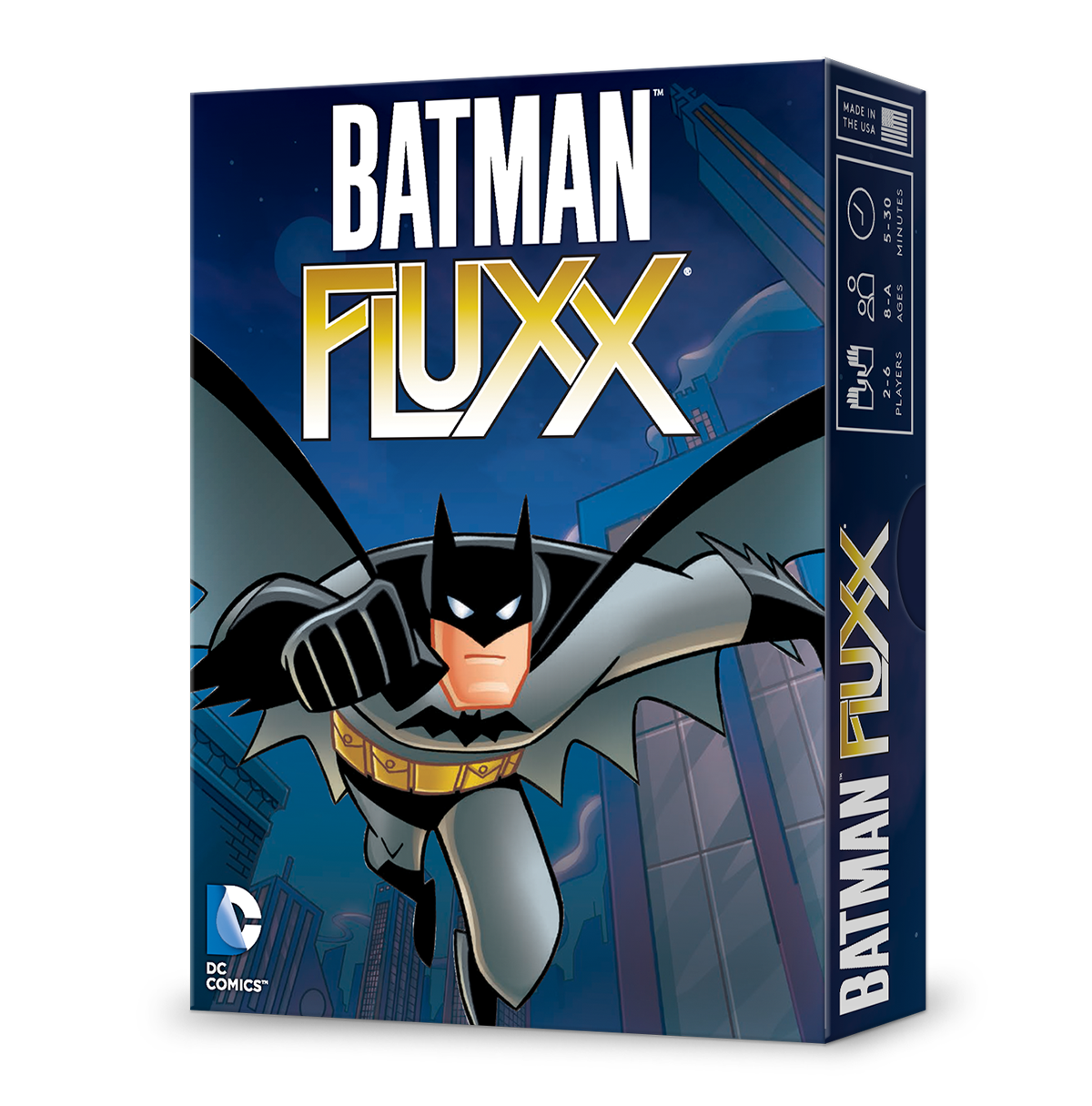 *I need to start this review with a SPOILER ALERT: Â I come into this review already loving theÂ FluxxÂ system, AND Batman is my favorite superhero of all time,Â sooooÂ there is a slight chance I am a little biased. Â That being said, I will do my best to remain impartial, and refrain from hyperbole throughout this review.*

THIS IS THE GREATEST ITERATION OF FLUXX TO DATE!Â

This conclusion comes after weeks of diligent playtesting.Â  I have several extremely valid reasons, and I shall impart them after a quick review of theÂ FluxxÂ game system for those who may be unfamiliar. Â

I know that is a lot to take in, so feel free to read over a few times before you attempt to run a game yourself. Â

For those whoÂ have played a version ofÂ FluxxÂ in the past, letâ€™s talk about some of the things that make this version different from the rest. Â First off, Batman. Â Second off, Batmanâ€™s toys. Â All of the Keepers that represent Batmanâ€™s equipment have really cool unique abilities. Â Other Keepers include Batgirl and Robin, who also have abilities that help you fight crime. Â I love this change, because it gives the Keepers a purpose other than simply trying to satisfy the goal.

What are these abilities used for? Â To defeat the villains of course! Â The entire rogueâ€™s gallery is here, including Poison Ivy, Mr. Freeze, Bane, The Joker, etc. Â They all take the form of Creepers. Â As with other versions, the Creepers are cards you are forced to play in front of you immediately, and replace with another card. Â They usually make it impossible for you to win the game if they are in play. Â In this version, a villain on the table prevents EVERYONE from winning.Â  This is an incredible detour from the usual Creepers. Â This means that everyone has to somewhat work together to defeat the villains if they want to win. Â

That is, if you want to win the game using a superhero goal. Â If you choose to attempt victory with a bad guy, this game has more opportunities to do it than any previous version. Â This is another change I really like. Â Creepers arenâ€™t always a bad thing!

Finally, theÂ LooneysÂ totally nail the Batman Theme. Â Bruce Wayne canâ€™t be on the table if Batman is showing, the Bat Signal allows you to steal Batman from someone else, theÂ BatmobileÂ allows you to take another turn, and there is even anÂ ArkhamÂ Asylum card that allows you to store Villains until the inevitable jailbreak!

In conclusion, whether you have EVERYÂ FluxxÂ game, or have never played it before, BatmanÂ FluxxÂ is the perfect addition to your game collection. Â I am no corporate shill: Â I truly think this is an amazing version! Â HolyÂ Fluxxitude Bat Fans, itâ€™s available August 7th!Â