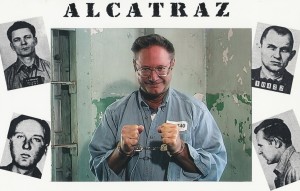 I met Chuck while he was giving an impromptu tour on the Island of Alcatraz in late 2012.  Like the Pied Piper of Hamlin, Chuck came with a small group, and accumulated quite an army by the time it was time to catch the ferry back home.  I was enthralled.  Chuck had an amazing story for just about every rock on The Rock,  Chuck was born on the mainland, and was transported to Alcatraz when he was just an infant.  No he was not deemed a psychopath at that early age.  His father, uncle and cousin were all correctional officers, and much to my surprise, a lot of them actually lived in the island itself.  I had never heard of this.   I struck up a conversation, and we sat down to talk a few months later.  Chuck has proven himself quite an amateur historian.   In his house, he proudly displays ankle shackles, and prison keys.   He has several neatly organized binders on just about every inmate, and he has tracked down rare archival footage, as well as several interviews with deceased Alcatraz Alumni.   We talked for about an hour, but it could have easily been 6 or 7.   Even then, we would have only scratched the surface of the phenomenon known as Alcatraz.