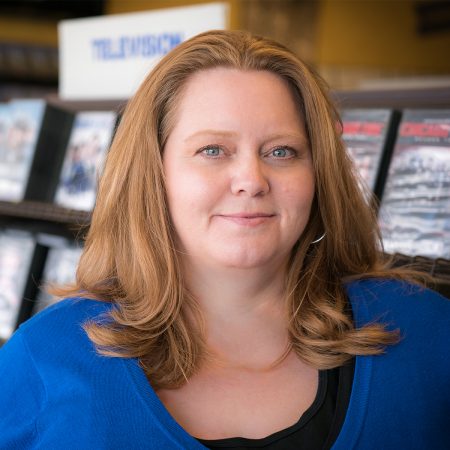 In 2011, Blockbuster went bankrupt.  So how is there is a Blockbuster operating in Bend, Oregon in 2021?  The answer to that is complicated, but I attempt to untangle it by talking to Sandi Harding, the current manager of the last Blockbuster on the Planet.  We discuss the rise and fall of video rentals, the documentary chronicling their unlikely fate, and how taking up knitting to relieve anxiety resulted in the need to make 600+ beanies in a month.

The 90’s were Blockbuster’s heyday.  Back then, flobby drives ruled, HDMI didn’t exist, and movie rentals were ninety-nine cents.  There is one place on the planet where that is still the case:  The Blockbuster in Bend, Oregon.  Listen as Sandi Harding tells me about her room full of antique IBM computers, the analog video system that is only compatible with first generation Blu-ray players, and how they haven’t raised prices in over a decade.