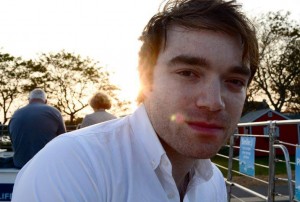 My second 2 time guest!  Listen to either of of our incredible interviews below.  If you like pinball or insane amusements parks, you came to the right place.
*Seth’s Bio*
Seth Porges is cofounder and CEO of Cloth app. He is also a longtime technology writer and television commentator. Previously, he worked as senior editor of Maxim magazine and as a tech  editor and columnist at Popular Mechanics. He has also contributed to dozens of publications, including Wired, InStyle, Men’s Health, Men’s Journal, BusinessWeek, Forbes, Fast Company, Mashable, Architectural Digest, and Rolling Stone. In addition to appearing as a regular guest on MSNBC, CNBC, and Fox News, he can be seen regularly on multiple series on the History, Discovery, National Geographic, Smithsonian, and Travel channels. Seth has written extensively about the surprising history of pinball, and regularly gives lectures on the topic.

If I was a more daring kid, this place would have been for me.  In a very Disney presents:  Lord Of The Flies way, Action Park taught a generation of kids how to be men.  Operating on the fringes of the law, Action Park’s thrust was for each individual to control their own experiences, experiences that involved barely legal rides, and death inducing adventures.  These included the Skin Shredding Alpine Slide, the Concussion Causing Cannonball Loop, and the Wicked Deadly Wave Pool.

Seth Porges - Action Park
Check out the documentary that started it all:
Action Park – The Most Insane Amusement Park Ever

An original 1983 commercial for Action Park:

I love pinball.  I always have.  Even when I was would go to arcades as a kid, I was always drawn to pinball.  Recently, when I heard about the strange and sorted history of Pinball, I decided it was time to do an episode on the older, more cerebral brother of video games.  I found THE pinball historian, Seth Porges, as we talked about how pinball destroyed a generation of young children (supposedly), a Mayor named Little Flower, and our favorite innovation:  The Multiball.

Pinterest Board with Pinball Pictures discussed in this episode: