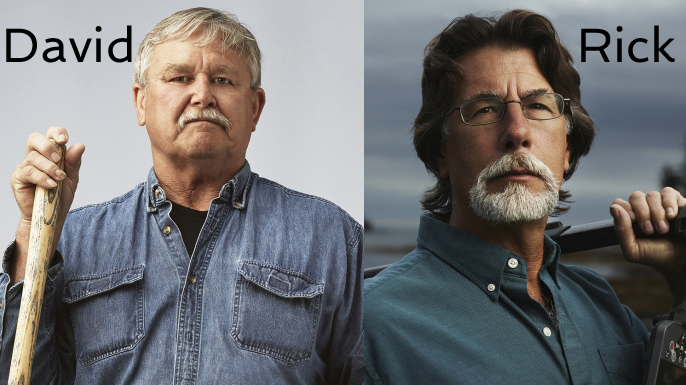 David Blankenship and Rick Lagina are real life treasure hunters, unraveling the greatest enigma of our time:  The Mysterious Oak Island.  What is Oak Island?  Legend has it that a great wealth of some kind was buried here, and over the past 300 years six men have lost their lives and fortunes trying to figure out what secrets this small chunk of land holds.  Oh, but the land comes with a curse:  ‘7 men must die before the treasure on Oak Island can be found’.

David and his father Dan are long time residents of Oak Island.  David’s father Dan Blankenship has been searching for treasure on Oak Island for the past 50 years.  These two know this place better than anyone alive.

Rick and his brother Marty are originally from Northern Michigan, and both of them have been  obsessed with Oak Island since they were just little kids.  They both read about it in the January 1965 issue of Reader’s Digest.  After earning a fortune in the energy industry, the Lagina brothers are using that technological know-how to locate and recover treasure.

Listen as we talk about the possible artifacts hidden on the island, the extreme paranormal occurrences, and the devastation of ‘Brute Force Technology’.

Richard Allan Wagner talks about the masonic connections to Oak Island, what could possibly be buried there, and who put it there.  It turns out, Sir Francis Bacon was the island’s original owner.

The 1965 Readers Digest article that started it all